A large-scale global survey on gender-based discrimination and harassment in the maritime industry has found that both are widespread against women at sea.

The Women's International Shipping and Trading Association (WISTA) International recently released results of the in-depth survey for the launch of a new Diversity Handbook, describing the figures on gender-based discrimination against women, onboard harassment, and bullying as 'shocking'.

Of the 1,128 female seafarers who responded: 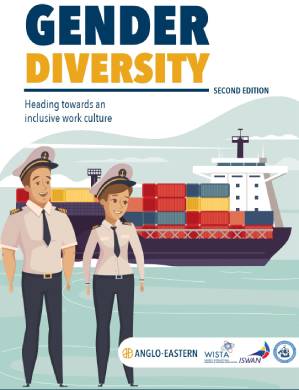 An overwhelming majority of the survey data (90%) was drawn from women who work onboard cruiseships, reflecting the high level of concentration of female seafarers in that sector of the industry.

In a question on onboard harassment up to 25% of the respondents to the WISTA survey said that they had experienced personal questions and other ways of intruding on privacy onboard, including being 'invited' to another crew member's cabin or being targeted by 'overly familiar remarks'.

The vast majority of those engaging in such behaviours are male seafarers (88%), while in other instances (11%) involve both men and women co-workers, and about 1% involve women.

In a separate question highlighting just how endemic harassment is in the shipping sector for many women 25% reported that physical and sexual harassment is commonplace, running the gauntlet of intimidating behaviour from 'uncomfortable persuasion', inappropriate remarks, and body shaming. In 90% of cases this was perpetrated by male seafarers.

Although almost all respondents (97%) said while they knew employers had policies banning harassment onboard, only a small minority had reported incidents either through a hotline (13%) or through their direct superior (13%) and only 7% were satisfied with the outcomes.

'There is an urgent need to create a more diverse, inclusive and equitable maritime community, with women seafarers deserving a respectful and safe working environment.'

President of WISTA International Despina Panayiotou Theodosiou said the figures 'should be a wake-up call to the maritime sector and we will continue at every opportunity to raise the issues and bring about change'.

The complete findings from the survey and recommendations are published in The Diversity Handbook, which was launched at the WISTA International conference in Geneva, Switzerland, on 26 October 2022.

Mrs Gupta said: 'Data is key and speaks of the current scenario. We have established that things are unacceptable and need to change; the Diversity Handbook makes recommendations and provides simple solutions to drive change.'

Off course podcast: 'not on my watch' – a role model's ripple effect

Influential woman in shipping and trailblazer for diversity Sanjam Sahi Gupta talks about the thorny issue of gender representation in Episode 2 of Nautilus podcast series Off Course: a sideways look at life at sea.

All aboard – the business case for diversity and inclusion in maritime

Equality and diversity: Working towards equality of opportunity in maritime