Investment in people is always the solution

After years of Union campaigning, a visa waiver that allows companies to import low-cost labour to work on UK offshore windfarms appears close to the end.

The UK Home Office has announced an extension of the Offshore Wind Worker's Concession (OWWC) until October 2022. The OWWC, a visa waiver scheme, began in 2017 and has since been renewed four times. It operates as a loophole, allowing employers to import cheap labour to work on offshore windfarms – undercutting wages for UK seafarers.

While any extension of this visa waiver is unfortunate, this is the shortest extension since the OWWC came into force in 2017. We believe this is the strongest sign yet that government is listening and is serious about closing the loophole, something we have campaigned on for years. Nautilus will continue to raise this issue with the Home Office until the visa waiver is finally scrapped but we believe the end is in sight.

I have always maintained that there is no credible evidence of a maritime skills shortage, despite employers arguing removal of the OWWC will mean they struggle to find qualified seafarers.

Offshore wind is a huge opportunity for investment in our maritime workforce, but this cannot happen unless the government is prepared to do everything it can to prevent a race to the bottom. Importing cheaper labour into a domestic market should never be the preference to the incentivisation and encouragement of good quality, local jobs, in local communities.

The expanding windfarm sector is important in support of urgent action on climate change – a wholly necessary transition from fossil fuels to renewables and a realisation that, as the saying goes, there are no jobs on a dead planet. The need for intervention is non-negotiable. Already, newer cleaner fuels and technologies are being deployed. However, a people-centred transition, what we refer to as a just transition, must be met with people-centred action.

The Maritime 2050 strategy in the UK is one example of a plan that recognises the importance of skills and continuous professional development. It also notes how better connectivity at sea can advance education and training, something Nautilus has long championed. However, barriers to seafarer development are financial as well as logistical.

Governments must incentivise businesses to re-train and employ seafarers in new and emerging technologies. Investing in the maritime industry of the future starts by investing in the seafarers of today.

According to a recent study by Oxford Economics assessing the impact of the UK’s Support for Maritime Training (SMarT) funding, for every £1 spent in support of cadet training, £4.80 was returned in tangible economic benefits. Sounds like a no-brainer to me.

The government should increase funding for training and in return see a substantive net return on that investment. Many of the UK's leading competitors, such as the Netherlands, provide support up to 100% of the cost of officer training. This is permitted under EU State Aid guidelines, which the UK government has committed to maintain and even enhance, so what's stopping it?

In return for that level of government support, to make training UK cadets a zero cost to the employer, I would countenance greater flexibility on the core training commitment under tonnage tax – so long as we are training more cadets there is nothing to lose. And as the Maritime Skills Commission has recommended, and is working to deliver, let’s make a step change in the training experience for officer trainees. Let's treat them as a valuable investment, not a commodity to tick a box.

The future must be an inclusive and diverse one. A future with investment in people is always the solution. 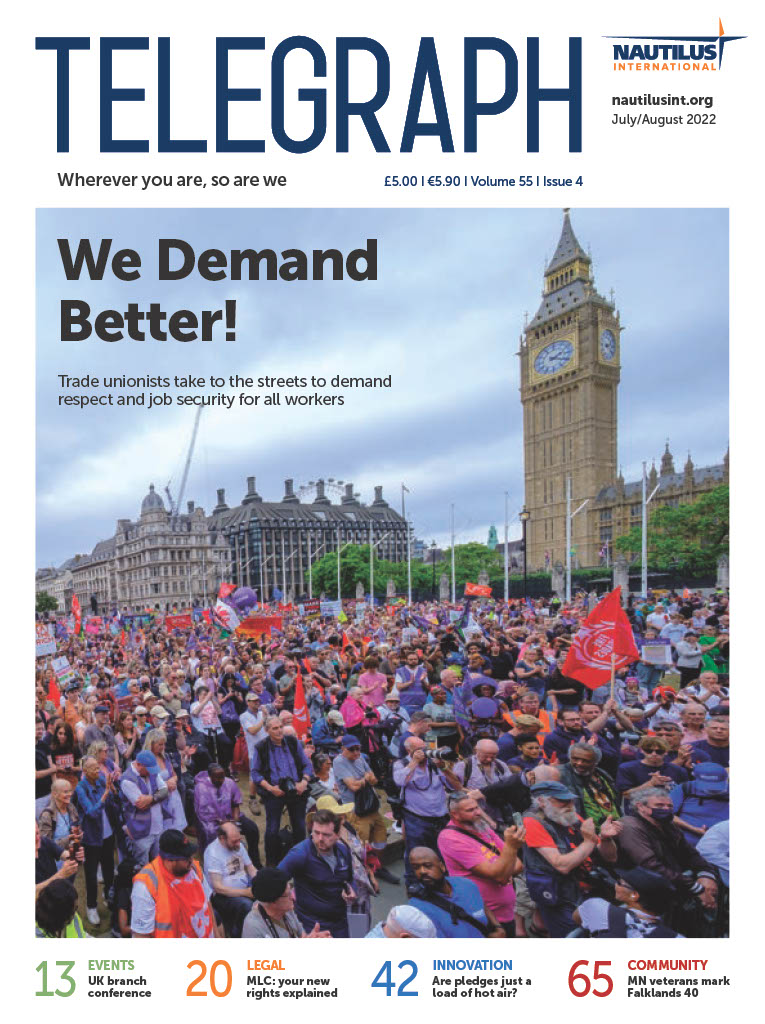 Members can download the latest edition of their Telegraph magazine by logging in to My Nautilus and visiting member resources.

Download the current issue
From the general secretary January/February 2022

Welcome to the new year and to the new Telegraph magazine. We felt it was right to kick off the new format with the results of a piece of researchthat highlights what working onboard ships is like, from the people who know: our members.

The Nautilus Social Conditions Survey takes the pulse of the maritime industry every 10 years. Launched in 1991, it is one of the longest-running continuous measures of seafarer attitudes to their living and working conditions. Uniquely, it charts our members' experiences before and during the coronavirus pandemic and gives some insights into the longterm consequences for the maritime industry of its failure to protect and support seafarers during this extraordinary time.

Our survey results confirm that, despite being hugely impacted by the pandemic, Nautilus members do not feel that their work was adequately recognised. In fact, many members feel that the pandemic accelerated the existing erosion of their employment terms and conditions, which was already under way but with the added insidious creep of redundancy, as some employers took advantage of the uncertainty.

Members reported that Covid-19 has been used as an excuse to decrease pay and increase trip lengths. The consequence of borders being shut, and travel suspended, is that seafarers’ freedoms have been curtailed more than most. We cannot underestimate the emotional strain caused by being stuck aboard a ship for months on end, unable to get shore leave or medical assistance ashore. It is no wonder that our members report they are exhausted and burnt out.

Nautilus is also hearing from its members that their physical health has been impacted. Seafarers want healthy eating options at work, and they want to stay in contact with family ashore. How much longer will they be treated like second class citizens when it comes to internet connectivity at sea?

Many seafarers are now changing their view on how they feel about their careers. Nearly 20% of members responding to the survey are looking to leave their current role, including 11% who would like to leave as soon as possible.

Labour shortages are already appearing and impacting on workloads onboard, which is going to create a vicious circle. This should worry maritime employers, and specifically the UK and the Netherlands, which have ageing workforces. Seafarers are moving ashore earlier in their careers due to shortages ashore, and too few people are being recruited into the industry. This type of weakness is not fixed in a matter of weeks or months, it takes years to build up a highly skilled workforce. It requires investment, and that means 100% support for the costs of training. The Netherlands does this, and so should the UK.

The pandemic has exposed a systemic failure in the regulation of shipping that must be addressed if we are to avoid future disrupting events of this type.

A regulatory system that fails to guarantee seafarers their fundamental social and employment rights, that fails to ensure that during a global health crisis seafarers have decent work, is no system at all. Our maritime key workers deserve better.

From the general secretary March April 2022

Nautilus is committed to promoting the hard work and dedication of our members and to keeping them safe in turbulent times.

Raising awareness of the key role that seafarers and maritime professionals play in our global society is a significant part of what we do at Nautilus. We are committed to promoting the vital work of our members, but more than that, we wholly believe in and appreciate the hard work and dedication that it takes to be a seafarer – and we understand the personal sacrifices many make to keep our lights on and our cupboards stocked.

Maritime professionals are key workers who kept the supply lines open during the turbulent past two years of the coronavirus pandemic. They have also sacrificed their lives for their country in wartime and stand prepared to assist again should they be required. Seafarers deserve recognition for this. Their selfless efforts should never again be 'out of sight and out of mind.'

To help spread the message and to celebrate the vibrancy of this industry, we commissioned a survey of 2,000 UK residents and 1,000 Netherlands residents across August-September 2021. This report, which we are calling the 'Maritime Barometer' serves as a springboard to enhance knowledge about the maritime sector, encourage change within the industry, help to enhance maritime as an attractive career option, and foster a better understanding of the needs of maritime professionals.

Maritime transport is the backbone of global trade and underpins the essence of modern life. We will use the Maritime Barometer to creatively tackle 'sea blindness' and bring our members the recognition they so richly deserve.

From the general secretary May June 2022

After the P&O Ferries scandal, we must take this opportunity to overhaul the working practices of the whole sector
March 17 2022 is a day that will live in infamy in the history of the British maritime industry. 800 loyal, dedicated seafarers were discarded by P&O Ferries without any regard for them, their families and their communities.

A renowned company saw its reputation shattered in the space of a three-minute Zoom call.

P&O Ferries broke the law by not consulting with unions, but sanctions are limited – the company calculated the cost it would have to pay for refusing to consult and for unfair dismissal cases, and factored that into redundancy offers.

It sets a very dangerous precedent and not just here in the UK: if you have deep enough pockets, you can pay your way out of complying with
the law.

This needs to change. The government needs to urgently create the statutory right to an injunction to compel consultation, lift caps on protective awards, and provide for unlimited fines for companies and their directors who ignore the law.

There are glaring gaps in UK employment law, including the immoral practice of fire and rehire. Some 90 seafarers who were dismissed were asked to re-engage with P&O Ferries through a foreign crewing agency.

The government said it will strengthen the code of practice on 'fire and rehire', but it will not prevent companies from buying their way out of a tribunal process. Fire and rehire must be outlawed, no dilutions or equivocations.

The Insolvency Service is pursuing criminal and civil investigations into P&O Ferries, which we support. The government has focused on creating 'minimum wage corridors' with European neighbours, and Nautilus has long called for such measures to support the employment of local seafarers. However, this outrageous action by P&O Ferries goes much further than minimum wage coverage.

Our Fair Ferries Strategy introduces a framework agreement that would require collective bargaining to be concluded with ferry operators on routes to and from UK ports.

These would be set at levels to encourage the employment of local seafarers, and governments must ensure that such agreements are enforceable.

We believe this strategy would create a sustainable future for the ferry industry, stopping operators like P&O Ferries from treating workers as expendable while ensuring a sustainable competitive environment for businesses to flourish.

This would create a true 'level playing field' that encourages a race to the top, rather than a race to the bottom in employment standards. Given the strategic importance of our ferry services to an island nation, it is a goal worth fighting for.